Technologies of the kitchen 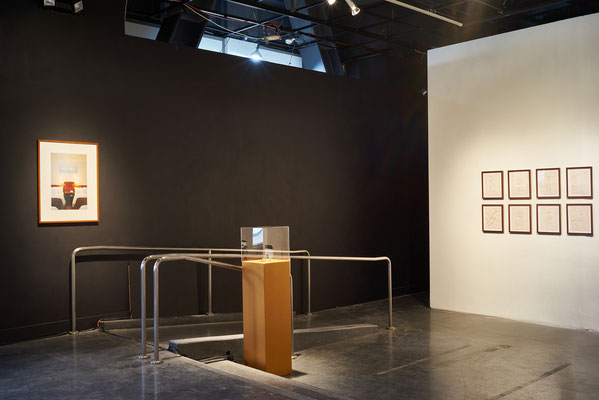 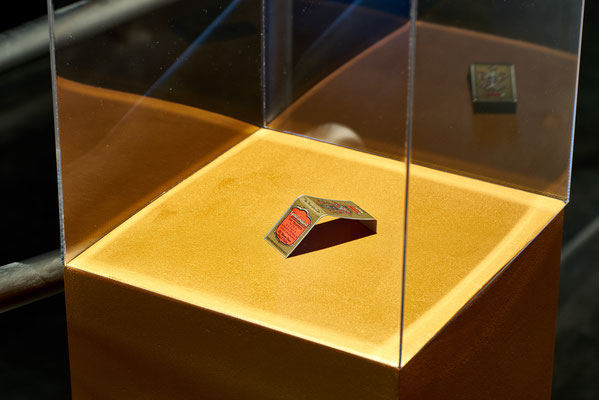 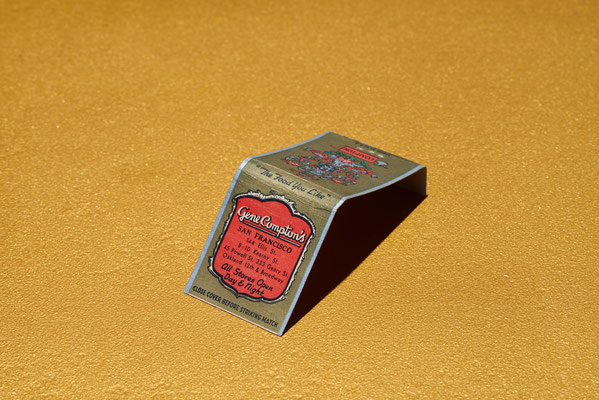 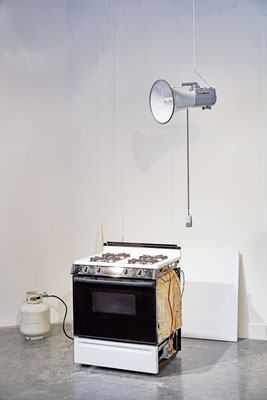 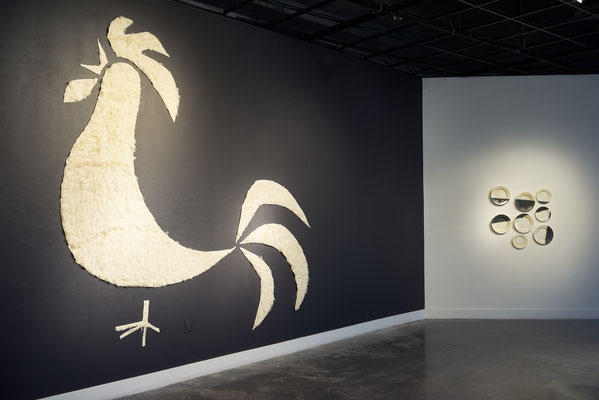 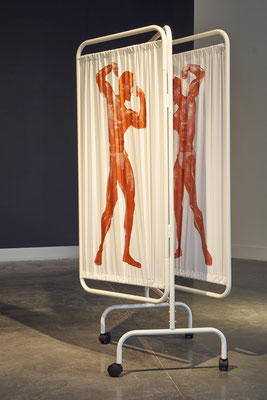 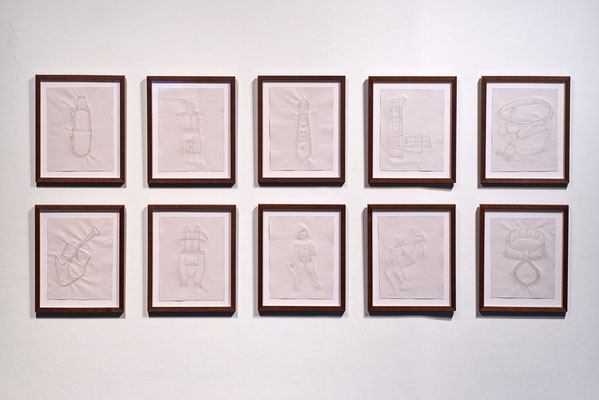 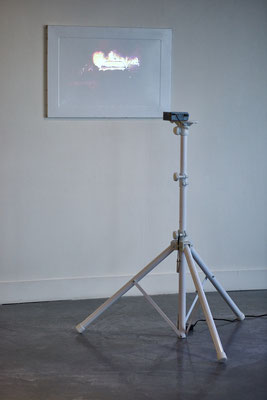 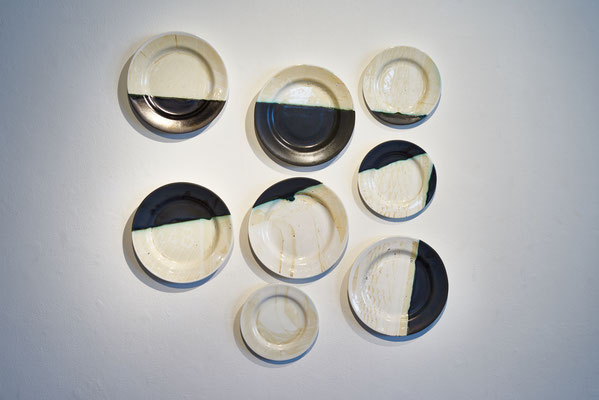 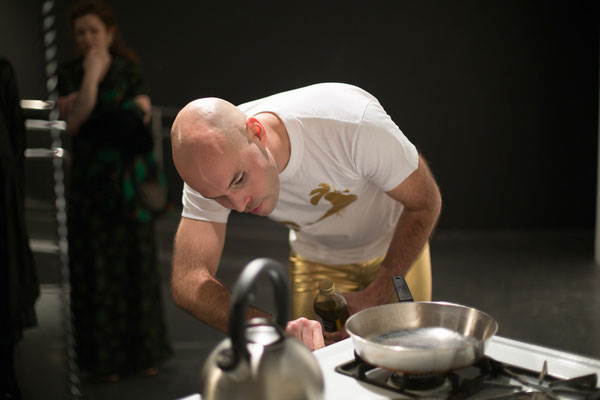 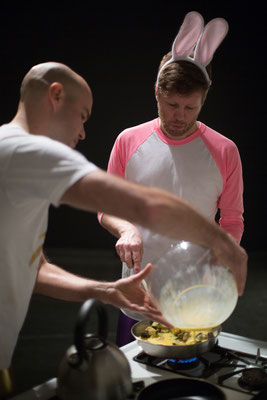 Technologies of the Kitchen is a queer take on the kitchen as a place, where bodies are made - and at times also quashed. It is where food is prepared and often consumed; where desires are triggered and regulated. It is also a place where ideas of health, beauty and convenience materialize through routines, technologies and the choice of ingredients. In Technologies of the Kitchen, Lasse Lau and Flo Maak selected historic narratives that challenge the common notion of the private sphere as a safe environment and present the public as a potentially dangerous space.

This exhibition consists of both pre-existing work by the collaborative artist pair, as well new work created while they were living in Oakland over the past four weeks. Burning I (Kitchen) is a partly disassembled, functional gas stove. The installation also includes a megaphone and a reusable grocery bag suspended from the ceiling. Together, these objects present a potentially dangerous machine. During the opening reception, this unique kitchen machine is used both to disturb and to prepare food.

Placed in relation to the kitchen, Burning II (Coffee) is a matchbook from Gene Compton's Cafeteria. The matchbook is placed in a vitrine on a golden pedestal. Located in the Tenderloin district of San Francisco, the Compton Cafeteria ambiguously welcomed queer customers and served as a meeting point for the transgender community. On a warm summer night in 1966, the regular transgender customers of the Cafeteria were harassed by a police officer, who was well known for abusing transgender and queer customers. One of the customers, who was not willing to accept the mistreatment any longer, threw a cup of hot coffee into the face of the police officer. This is how the now named “Compton's Cafeteria Riots” started. Recorded as one of the first queer riots on record in the United States, the Compton Cafeteria Riots were almost forgotten until a local Pride newspaper picked it up a decade later.

Located behind the Compton's Cafeteria matchbook, a photograph shows a hotel room with two identical beds redecorated by Lau and Maak. Two pictures of wire hangers are shown hanging above the beds. The photo represents a standardized idea of “feeling at home” of fleeing places, of changing appearances, exemplified in anonymous room of the hotel. Titled Family Portrait, the image points to alternative ways of belonging beyond the biological family.

Burning III (Cars) is installed at the opposite end of the gallery. Lau and Maak repurposed the side panel from the kitchen gas stove as a projection screen. For the video, Lau and Maak re-appropriated TV footage recorded during the “White Night Riots” in San Francisco on May 21, 1979. This series of riots broke out after the sentence announcement of the murder of Harvey Milk, the first openly gay person to be elected to political office in California. His assassinator was sentenced to seven years in prison.

Directly to the left of the projection piece, Dinner Time consists of a series of plates. Created over the course of Lau and Maak’s residency at Pro Arts, the ceramic plates are partially covered with a dark glaze overlapping an iconic and now faded photograph. The image depicts a group of drag queens in a paddy wagon in New York City after a police raid during the 1960s.

The most prominent piece in the exhibition is Kellogg's “Corny” Cornflakes. The piece a representation of the rooster from the Kellogg's cornflakes logo, named Cornelius Cornflakes. The rooster is made of flokati, sometimes referred to as shag carpet. John H. Kellogg is best known for inventing the breakfast cereal, but he also founded and ran the long running Battle Creek Sanatorium. At this facility, Kellogg offered treatment for all kinds of illness through diet, exercise and the use of electronic devices, many of which he personally invented.

Most people believe chastity belts were an invention from the Middle Ages, but the most anti-masturbation devices, were invented by Kellogg’s contemporaries. For example, the device Sexual Armor was invented in 1908 with the US patent number #US875845. These devices fit well within the rigid mindset of the Victorian Age. Referencing these inventions, Lau and Maak used drawings from eight US patents of chastity devices to create ten different embroideries on synthetic leather. Each piece of embroidery is titled with the device’s registration number, name, and date of the patent.

Kellogg's approach of including questions of nutrition in the development of medical treatments is not so unusual. It points to an interesting overlap in the functions of two otherwise distinct institutions: the hospital and the kitchen. Both spaces are normally utilized with the goal of strengthening and healing the body. They also reflect historic norms and ideals of beauty and health during their time period.